At the beginning, the work of the company mainly consisted in plumbing and repairing of agricultural machines.

Later on, the production of various agricultural machines was initiated. At first, beet cutters and later potatoes boilers, which became the main product from the beginning of the 1950’s until the mid 1960’s.

Screw conveyors were installed in the potatoes boilers to transport potatoes to and from the boiler. When the use of potato boilers was reduced in the mid 1960’s, screw conveyors became the new main product of the company.

700 m2 was inaugurated. Since the death of Anders Pedersen in 1992, the company has been managed by his son Arild Pedersen and now counts 20 dedicated and experienced employees.

The company supplies to end-users and manufacturers in Denmark and abroad. Approx. 35 % of the production is exported to primarily Sweden, Norway, Iceland, Germany and Switzerland.

As a 100 % order producing company, the main objective is to provide flexible and high-quality service, ensuring short lead times. 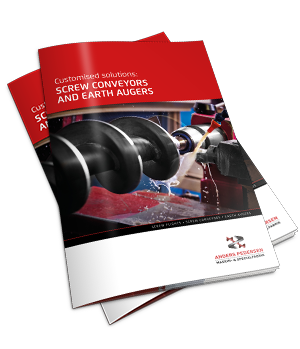